Why does the Ogallala Aquifer need to be preserved?

The Ogallala Aquifer provides almost all of the water for residential, industrial, and agricultural uses in the midwest. 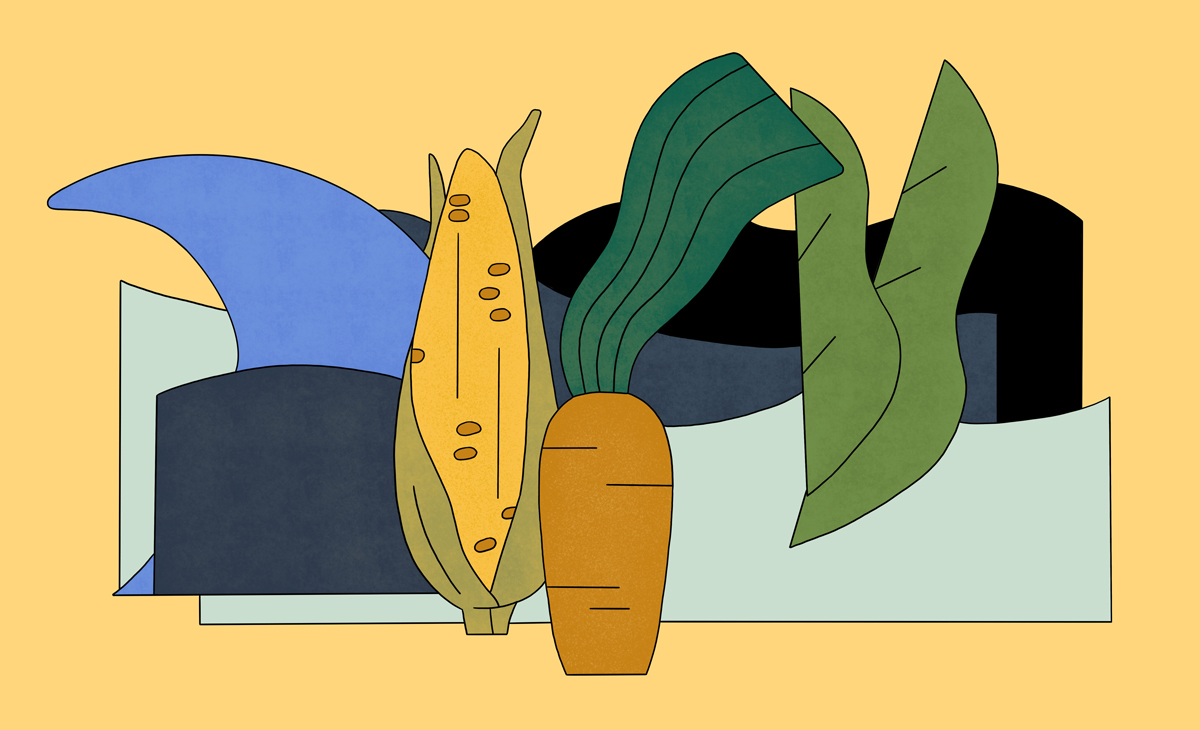 What is the Ogallala aquifer?

Beneath America’s “breadbasket” — the Great Plains, which bear a staggering one-sixth of the world’s grain produce — lies a hidden and precious natural resource. The Ogallala Aquifer is a 174,000-square-mile underground water reservoir. The Ogallala’s freshwater supply is sometimes referred to as “fossil” water because it is the remnant of ancient glacial melts. Pockets of silt and sand enclose pools with depths ranging from 30-500 feet. The Ogallala’s groundwater is most richly concentrated in Nebraska and Kansas — its northernmost point touching South Dakota and expanding south all the way into Texas. Discovered in the 1890s, it is the largest underground water source in the U.S.

The Ogallala Aquifer provides almost all of the water for residential, industrial, and agricultural uses in the region, with farming accounting for 94 percent of its extraction. $20 billion a year in food and fiber depend on this resource, which once seemed like an endless freshwater reserve. We know now, though, that even in its vastness, the Ogallala can’t sustain us forever. 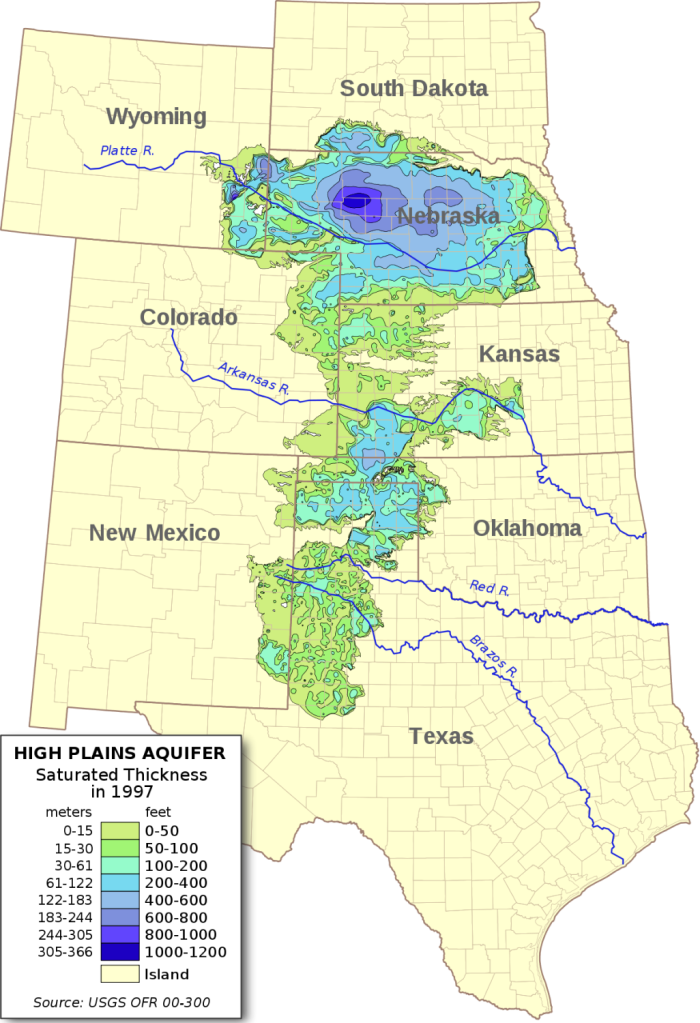 Or more precisely, it can’t sustain the type of intensive wheat, corn, cotton, and cattle farming that’s currently draining groundwater much faster than it can refill. The aquifer is recharged almost exclusively by rainwater and snowmelt, which, in the semiarid climate of the High Plains, is an extremely slow process. In some areas, the water table is dropping up to two feet per year, while recharge averages about three inches annually. Given climate projections of lower precipitation rates and higher temperatures in coming decades, the future of the Ogallala looks grim.

A 2013 Kansas State University study estimated that with business-as-usual farming practices, the aquifer will be 70 percent depleted by 2060. However, increased education on and resources directed towards regenerative agriculture offer hope. Specifically, methods that increase groundwater retention like no-till, pasture cropping, and natural mulching — all of which help bolster the soil ecosystem and reduce water runoff and evaporation — in addition to incentive programs to help farmers rely less on pumping groundwater, may increase the Ogallala’s lifespan.

A brief history of the Ogallala Aquifer

Long before European settlers arrived, Native Americans stewarded the High Plains grasslands, adapting and responding to the limited and variable water resources of the region. The ancestors of the Pawnees, for example, followed the courses of the Solomon and Republican Rivers during times of increased rainfall, and moved east toward the Missouri River when precipitation levels fell. As settlers from the eastern U.S. colonized the Great Plains in 19th century, water became a marketable commodity and more aggressive withdrawal began.

Industrial-scale extraction did not occur until after World War II when, in 1949, Colorado tenant farmer Frank Zybach patented the center-pivot irrigation system. These machines use aluminum pipe mounted to A-frame towers to draw massive volumes of groundwater to the surface. Zyback’s invention led withdrawals to quintuple over the ensuing 25 years, supporting the conversion of millions of miles of perennial grassland into agriculture.

Essentially, the entire population of the middle third of the U.S. is reliant on the Ogallala Aquifer. Without it, agriculture and related businesses can’t operate. Though action to preserve this vital resource has yet to significantly intercept its ultimate demise, regulation and conservation efforts have occurred at various levels.

In 2011, the federal government instituted the Ogallala Aquifer Initiative to provide technical and financial assistance to farmers to implement water conservation practices. Key strategies include:

Kansas State Legislature allows groups of farmers to voluntarily create “Local Enhanced Management Areas” where they can implement groundwater conservation plans to be approved by the state and ultimately become legally binding. One group of farmers committed to a 20 percent reduction of irrigation over five years on a 99 square mile conservation zone. They did so successfully with no reduction in profits. However, this remains the only group to submit a plan in Kansas, casting doubt on the wide-scale viability of this strategy.

Nebraska has had more success by allowing state government to limit farmer’s water allocations and implement rotating water permits, in addition to giving farmers autonomy to create their own conservation plan. Nebraska has slowed depletion better than most other states, but extraction still outpaces recharge at an alarming rate.

The Ogallala Water Coordinated Agriculture Project (OWCAP) is a USDA funded research and outreach project headed by a team of researchers and specialists with experiment stations in six Great Plains states. OWCAP objectives include:

Where do we go from here?

Research shows that the vast majority of farmers in the region want to save the Ogallala Aquifer. Groundwater is not depleted due to individual farmers’ preferences, rather, the problem is systemic. We know that existing production levels cannot be sustained for much longer, but without help from policymakers, farmers won’t be able to weather the financial impacts of lower yields in exchange for conservative water use.

The Great Plains Tribal Water Alliance, a nonprofit established by the Standing Rock, Oglala, and Rosebud Sioux Tribes, provides technical and policy recommendations for the protection of water resources. Organizations like this serve as an example of the crucial interplay between government intervention and farming communities, and may help provide the support farmers need to protect the Ogallala Aquifer and the populations it nourishes.

How does Farm participate in water conservation?

Farm invests in parcels of grassland where native ecosystems are preserved to strengthen the integrity of the soil and improve water retention. The Grassland Conservation Reserve Program (CRP) is a federally funded program that helps agricultural producers pursue land restoration rather than farming or ranching. Every bit of conserved land is both protected from pumping and actively rebuilding natural aquifer protection mechanisms.

Each long-term investment you make on the platform supports a commitment to reducing carbon emissions and responsible land stewardship. Interested in learning more? Request access to get started.

Stay up to date on weekly product news and climate investing trends you won't find anywhere else.

Questions? Drop us a line.